Unibet, now an independent poker room, celebrates 200 million hands dealt in their Milestone Hands promo with over 600 prizes up for grabs.

Its celebration time for poker fans at Unibet as the online poker site gets set to launch its biggest promotion ever to date. The site invites members to join in on some high octane poker action and grab the opportunity to take home a share of up to €1 million in cash prizes.

The good news is that every player at a cash game table at the time when the 200 millionth hand is hit will be eligible for entry to a €10,000 free roll. The tournament kicks off on Sunday 27, September 2015 at 17:00 CET. The winner of the 200 millionth hand will receive a cash prize depending on the game played, and hand strength. A Full House is worth €25,000 in Hold'em and €20,000 in Omaha while the lucky one to win a Royal Flush gets €1 million. The base amount for every Milestone Hand depends on the hand number and on whether the hand is on the millionth category.

Cash Prizes Every Step of the Way

Unibet is definitely going the whole hog this time with the winner of the hand also eligible for a prize based on the hands that reached the flop in the first 60 minutes before the Milestone Hand. That leaves players with the chance to win an extra €400 to €140,000 while everyone else at the table could win between €80 and €28K. Players will be notified when a Milestone Hand is about to be played. Prize multipliers are determined by multiplying the stake multiplier by the average flop multiplier. Details of payouts based on winning hand combinations are available on the Unibet website. There’s no doubt that this promotion is a great way for any poker fan to maximize returns on any given game so make sure to head to Unibet today. 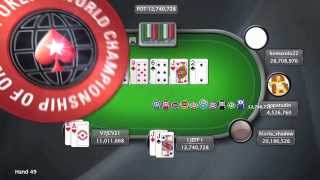 Highlights of Event #4 of the World Championship of Online Poker

Poker has been one of the popular gambling games across the world for a long...